Hololens: What Kind of Applications Can We Build? 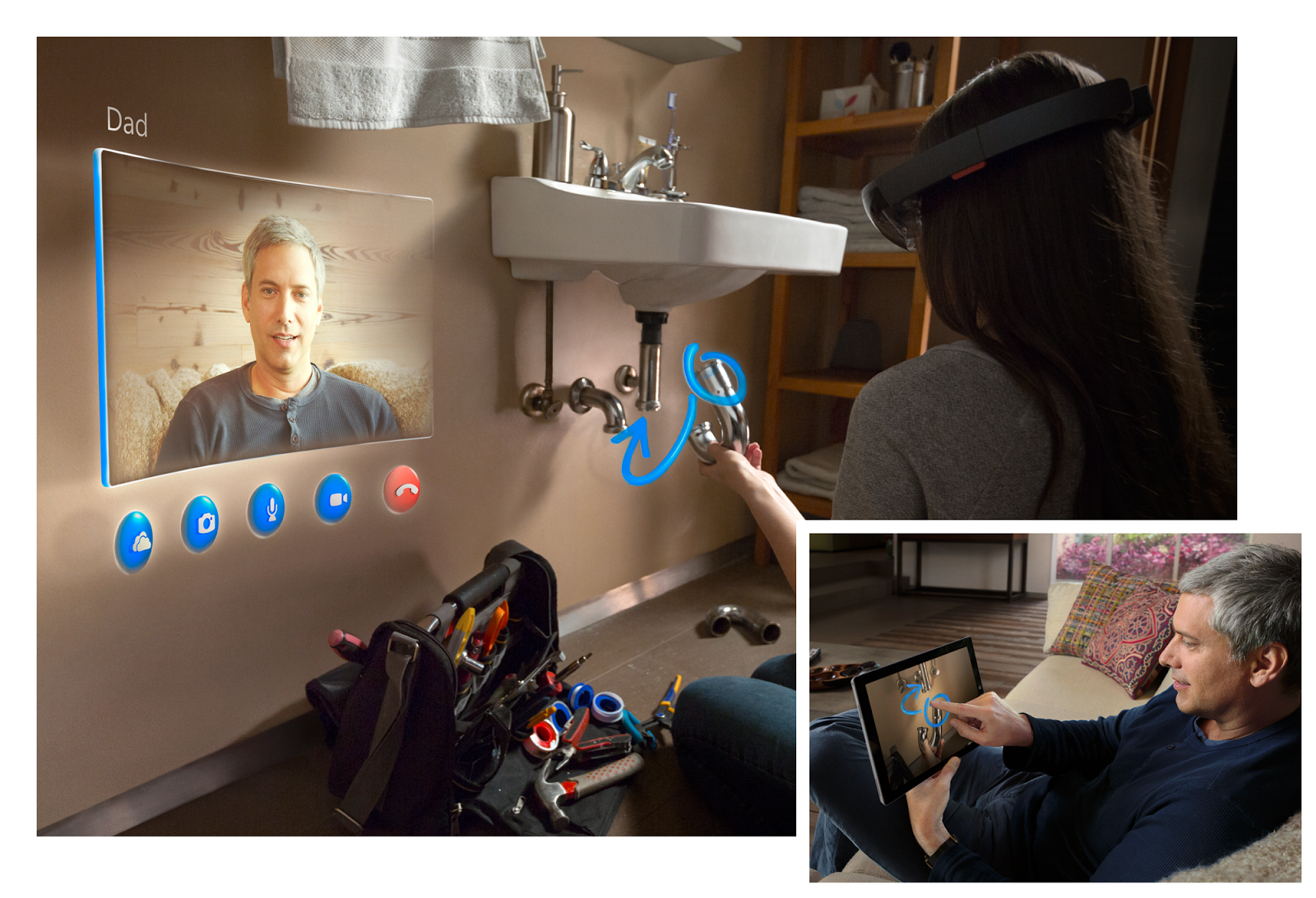 The creative potential of Hololens and "Mixed Reality"is huge. There are a wide variety of applications we can develop for it.

I believe the demos shown so far are barely scratching the surface of what we can do with the Hololens. Once the imagination of the development community warms up, we're going to see world changing ideas. Industries will be turned upside down, lives will be changed, and millionaires will be made.

I'm going to make some assumptions on its abilities, but try and highlight some of the many directions we can take in creating for the interface of the future.

One of the most interesting uses for the Hololens is allowing others to share your experience, and interact with it. This opens up many prospects for communication and collaboration in virtually every industry.

Think about how cool GoPro cameras are and what we're able to do with them. Now imagine seeing the video live and being able to interact with it.

This particular feature also has plenty of promise for gaming, with users interacting with the same virtual objects, the same reality, or in the same game area.

Probably the main purpose of Hololens is its ability to overlay the imagined onto the real. We have seen some examples of this, and there is so much more to come. Interfaces will probably make up the bulk of these overlays, and there is plenty of scope for variety in how these work. But the possibilities go much further than just interfaces.

We've seen game characters and levels merge with the real world. What about augmenting our environment with photo-realistic people, new fixtures and furniture, or movie scenes? Or changing our atmosphere with movement, light, and sound? Virtual Reality might do this better. But having the real world still in view gives a certain edge to the atmosphere.

The use of gesture controlled interfaces might have been around for a while, but it takes on a new potency in the realm of artificial reality. Rather than interacting with things on a screen, you'll now be able to "physically" interact with "objects" in your world.

And while the recognisable gestures are still quite simple, this will only get more complex with time. As the Kinect technology gets better at recognising more fingers and more intricate movements, it will allow for more advanced control in much the same way as musical instruments or crafts.

Let's not forget that the Hololens cameras can be used to process the real world and the things in it. Measuring distances, identifying objects, detecting movement and more can all lend to the interaction.

How far can we take this real world processing? Imagine, tailoring your experience based on what the Hololens sees, such as popping up an information snippet of a visible landmark, finding your friends in a crowd, or identifying danger.

Like gesture controls, voice finds new opportunities in this context. It's part of the experience, narrating what you see, talking over the internet, recognising commands, sometimes recording. What else?

There are probably several more Hololens abilities that I've missed, so please leave a comment if you can think of any. Each of the items above has the potential for some groundbreaking new applications. Combine two or more concepts and the possibilities increase exponentially.

We just need to start thinking differently about what we can do. Rather than extrapolating our current computers and software to this new paradigm (which we should still do), we should try to think about what new possibilities all these new capabilities afford us, separately as well as combined.

I didn't want to get too deep into these possibilities, I really just wanted to highlight them, to get people thinking about how they might use each of them.

It'll probably take a few years for the world to realise what Augmented Reality can do for it. But all ideas are built on other ideas.

March 26, 2018
Classes should only have one reason to change. We should attempt to increase cohesion between things that change for the same reason, and decrease the coupling between things that change for different reasons. Classes should do one thing and one thing well. Violations of the Single Responsibility Principle can cause code to be difficult to test and maintain, and can make it easier for bugs to manifest. There are a few symptoms of SRP violations which can give warning signs of these issues. Large classes/methods Obviously large classes and methods do not always point to SRP violations as there may be a requirement for a significant amount of logic. However, it is usually a good sign. Large methods are more likely to point to an SRP violation than large classes, or at least too much cyclomatic complexity. You'll become aware of this when you attempt to cover the method with test cases, and realise there are excessive test combinations required. Too many injected depe
Read more

May 08, 2019
It seems to be by default that classes, methods, etc are created with the public access modifier. This is not actually the case, the default is internal class/private members, but public seems to be the de-facto choice by a lot of developers. If you're creating a public class - you have a big responsibility. Your code can now be used by anything else in the application, or even outside it. This means if you change the internal working of it, you will affect everything that uses it - and you have no control over what that is. This means a couple of things. Naming is always super important Naming of public classes and methods and their expectations should be crystal clear. Don't rely on comments to convey intentions. It must be highly obvious what the class is for, what it does, and how method parameters are used. It should be specific and adhere to the Single Responsibility Principle - one reason to change. If someone comes along and adds a parameter to one of your methods t
Read more